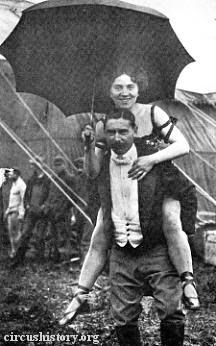 In contrast to the fiery pairing of Lilian Leitzel and Alfredo Codona in our last post, Fred and Ella Bradna represent, perhaps the most ideal couple in circus history. Ella Bradna grew up in her father', Johan Bradna's circus in the late 1800's, training as an equestrienne and wire walker. Until the age of 11, she generally played second fiddle to her sister, Beata on the equestrian stage, but after a fall broke both of Beata's legs, Ella was allowed to replace her. She proved to be very much her sister's superior in grace and skill, due in part to her earlier additional training in ballet.

Fred Ferber grew up in a very different kind of family in provincial France. Ferber was serving as a cavalry officer in the German Army when he attended the Nouveau Cirque on the fortuitous night of Ella Bradna's debut as a bareback rider in 1901. Near the end of her act, Bradna was thrown from her horse, over the ring curb and into the box seats where Bradna was sitting (in some reports, directly into his lap, though in others, she was simply near Ferber who leaped to her aid until other members of the circus could help her). So taken was Ferber with the young circus performer that he arranged for an extended leave from the army in order to carry on an extended courtship with her, much to the displeasure of his parents who began a thorough investigation into the woman who had caught their son's eye.

Eventually, the Ferbers consented to their relationship and Fred resigned his army commission and joined the Nouveau Cirque  as an assistant equestrian director (presumably parlaying his experience as a cavalry officer into his new position). Shortly afterwards, the two were married and Fred took his wife's already famous name rather than asking her to adopt his own unknown one. Later that year, the two joined Barnum and Bailey's when they returned to the United States after a European tour.

In 1913, ten years into their marriage, Fred became Barnum and Bailey's 10th ringmaster. He would go on to hold the title, after Barnum and Bailey's merger with Ringling Bros. for 31 years, creating the visual archetype for ringmaster's to come, red tails, white pants, riding boots and top hat. The Bradnas were present in 1944 for what many consider among the greatest disasters in circus history, the Hartford circus fire, Fred playing a vital role in trying to rescue the audience present from the flames after being alerted to the danger by band leader Merle Evans who had instructed the band to play "Stars and Stripes Forever" a traditional signal within the circus to any form of emergency. Unfortunately, due to an untimely power failure, Fred's attempts to warn the audience to the danger went unheard. All told, an estimated 168 people were killed in the fire, most of them children who died of being trampled rather than from the flames.

The following year, Fred Bradma was injured during a blowdown of the show's big top and, after 42 years in the circus, was finally forced to retire. Ella joined him and the two moved to Sarasota Florida, a popular retirement destination for circus veterans. The two lived there until Fred's death in 1955 and Ella's in 1957. Their marriage lasted more than 50 years, proof that, contrary to many of the stories we've seen so far, some circus lives do end happily ever after. 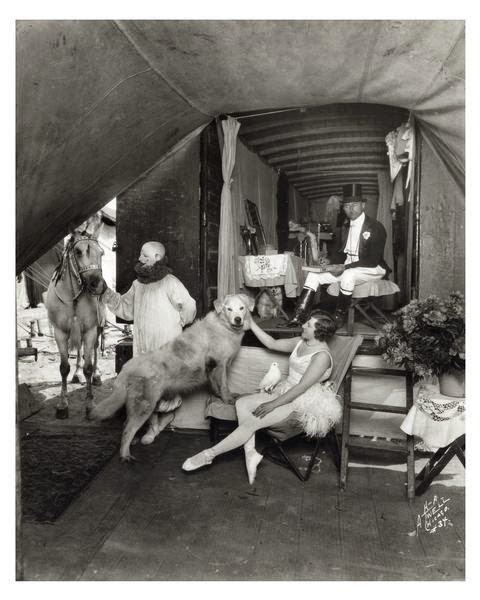